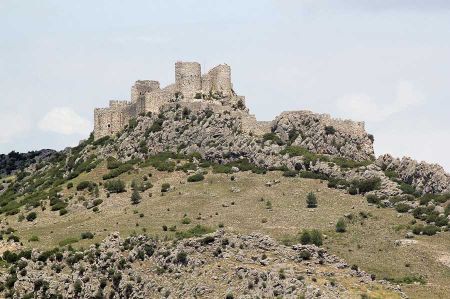 On the way to Sanliurfa we first passed Adana on the toll road E90 towards Ceyhan.

Already during our last trip to Sanliurfa we noticed the crusader castle Yilanli Kalesi near Ceyhan, but our appointments did not allow a stopover at that time. About 50 kilometres behind Adana we left the motorway, which was actually paved with quite modern whisper asphalt, in order to continue on the D 400 towards Ceyhan. After about 5 kilometres we had to turn right, then we could already see the Crusader Castle on a ridge to our right. Now we just followed the course of the narrow road and after about 3 kilometres we were right at the foot of Yilan Kalesi Castle.

A comparison with the Barbarossa Castle near Anamur is obvious

Comparable to the so-called Barbarossa Castle near Anamur (Mamure Kalesi), the Yilan Kalesi fortress is a medieval castle from the 11th to 13th centuries, which was probably built by the Armenian King Leo II and was used by the crusaders on their way to the Holy Land. According to a legend, the legendary contortionist Meran is said to be the builder of the castle. Whether this was the basis for the later naming by the Turks is at least controversial, because Yilan Kalesi is Turkish expression which stands for castle of snakes. However, popularly the fortress is also called Sahmiran Kalesi, probably based on the legend of the Semiramis. However, the naming came about, Yilan Kalesi is clearly one of the best-preserved medieval castles from the Crusader era in the former Kingdom of Kilica.

While the Mamure Kalesi in Anamur is right on the beach, the Yilan Kalesi fortress is a typical spur castle on a rugged mountain ridge that is barely accessible. To fortify the main castle, semi-circular defence towers up to 15 meters high were integrated into the castle walls. This type of tower construction can also be found in other parts of the region, e.g. at the Lambron Castle, which is why this type of construction is a typical and characteristic sign of Armenian fortress construction. The entire building material consists of quarry stone and only slightly hewn ashlar stone. The so-called gatehouse to the main castle is also flanked by two towers that are semi-circularly integrated into the wall. However, you will look in vain for the typical medieval construction of castle complexes. In the main castle itself, the remains of a chapel can be seen, and the otherwise rather problematic supply of drinking water has apparently been solved very well here, because the remains of extensive cisterns are scattered around the castle grounds. The outer bailey, which is so important for defence, lies on the same ridge, but has significantly fewer fortifications.

Baldwin of Boulogne and the Crusades

The rugged mountain ridge that forms the basis of the castle shows, according to GPS, a height of about 175 meters above sea level. Quite a stately height in the otherwise rather flat terrain around the city of Ceyhan. The builders of the castle and later the crusaders had known how to use the existing terrain to their advantage. In general, it is interesting to visit the supporting locations of the crusaders, because the surroundings and their people were mostly hostile. Already during the first crusade large areas were annexed and equipped with European "rulers", as an example only Baldwin of Boulogne and his descendants are mentioned here.

As in other regions with culturally worth preserving buildings in Turkey, there are hardly any recognizable measures in Yilan Kalesi on the part of the institutions set up to preserve the cultural property to maintain the fortress. Even in the village of the same name, Yilankale, hardly anyone cares about the castle, so that it is exposed to further deterioration without protection. A little care and interest (sometimes just setting up and emptying a waste-paper baskets) could be very beneficial to the development of gentle tourism. This is especially true correct when thinking of the strong tourism development in Adana and the surrounding area.

We have 184 guests and no members online