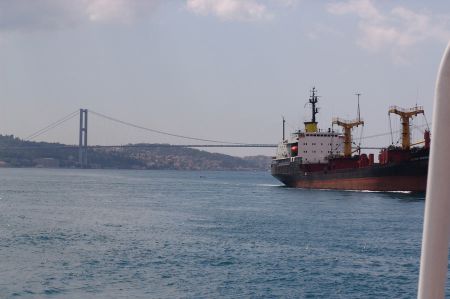 Up till now there is still peace and tranquility at the Küçükçekmece Gölü (Lake) in the Marmara region, nestled between the Istanbul districts of Küçükçekmece and Avcılar.

The Küçükçekmece Gölü is located about 23 km west of the Istanbul center at sea level, has a length of 10 km and a width of 6 km. Its area is 16 km² and its maximum depth is about 20 m. At the lakes shore there are the places Küçükçekmece and Avcılar. The tides shifted the sand and rocks to form a silt and separate the lake from the Sea of Marmara. On the south side the narrowness is interrupted. This gap leads the excess water into the Sea of Marmara. When the sea is restless, seawater enters the lake, making the seawater a bit salty. The lake is fed by the tributaries Nakkas, Sazlıdere and Eksinoz flowing from the north.

Already some years ago there were first publications for the construction of a channel, which is to connect the Lake of Marmara with the Black Sea in order to take same traffic away from the busy Bosporus. Seven years after the announcement of the major project, the route for the proposed new waterway has now been announced. The 45-kilometer route will begin at Lake Küçükçekmece near the Sea of Marmara in the southern part of Istanbul's European side and will pass through the Avcılar and Başakşehir districts before reaching the Black Sea in the Arnavutköy district, north of the city.

Prime Minister Erdoğan had announced the construction of the canal, which he described as a "fantastic project", prior to the 2011 election. The $ 16 billion project will be 45 kilometers long and up to 600 meters wide.

"The opening of a new channel parallel to the Bosporus, which we call the Istanbul Canal, is my dream. God willing, we will probably lay the foundation at the end of this year or at the beginning of 2018",  Erdogan had announced at the Turkey-Serbian Economic Forum in the Serbian capital Belgrade. According to Turkish media, seven kilometers of the route will pass through Küçükçekmece, 3.1 kilometers through Avcılar, 6.5 kilometers through Başakşehir and most of the route via Arnavutköy.

According to official reports, the construction of the canal is expected to employ around 5,000 people. After completion, it should still provide about 1,000 people a job. By the new channel, the Turkish government hopes to relieve the Bosporus from shipping traffic, especially the oil tanker traffic that crosses the Bosporus. The Istanbul Cannel will have a capacity of 160 ships per day and should be completed by 2023.