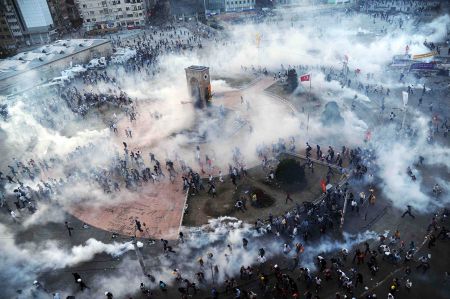 This saying, fixed in Turkish on a garage door in Istanbul, which basically applies everywhere in the world and regardless of any religious orientation or world view, seems to have a completely different interpretation relevance in Turkey.

Here, as before, only the partisan interpretation of a party, albeit 50% elected by the people, counts, how the people have to think and behave. There is actually a politician who supposedly guarantees the civil liberties of every individual, who closes his eyes to reality and does not want to recognize that his people, even large parts of his own electorate, are far from being infiltrated by left-wing splinter groups or even terrorists (like is still claimed) to go to the rallies and demonstrations. It is still claimed that these elements are even controlled from abroad. How unworldly and blinded do you have to be to assess the actual situation so unrealistically. How else can one demand that "the demonstrations have long since lost their democratic legitimacy and have turned into vandalism".

Or is it already about unrestricted retention of power? 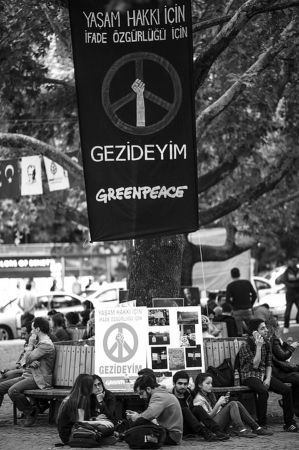 Ten days ago, only a little concession from the highest political authority would have been necessary, a little understanding and fundamentally less interference in the personal freedom of each individual in order to turn the conflict into a peaceful discussion with one another. Is this perhaps not what the political leadership wants at all? Don't you want to be there for all the people?

Westerwelle, the German Foreign Minister, rightly states: "This is a test for the Turkish government to show Europe and the world that the rule of law and civil liberties mean something to them" and further: "Prime Minister Erdogan has a special responsibility to calm the situation down. He must be aware of this responsibility" it would be better here to "become aware". But if freedom of the press is trampled on and the media are brought into line or belong to conglomerates of companies close to the government, then objective reporting no longer works either. Why else did it take two days for large sections of the Turkish media to finally pay attention to what was happening on the streets. How fortunate that there are now some media representatives who have become aware of their actual task of objective reporting and report on the events on the streets and squares and document them with pictures and film material.

"We wholeheartedly welcome those who put forward democratic demands," said Erdogan in Istanbul. Then why is massive police action taken against these people who are making democratic demands? The use of violence always encourages violence from the other side. This shows whether lessons have been learned from history, including that of other peoples and nations. At the same time he warned: "We are against violence and vandalism and against actions that threaten other people in the name of freedom." Images, data and facts clearly speak a different language. Where is the violence coming from? 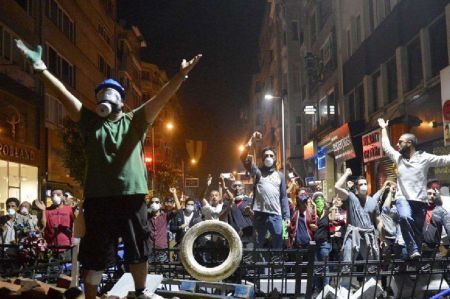 Demonstrators had a full-page advertisement published in the New York Times entitled “What is happening in Turkey”. In the last 10 years, the personal rights and freedoms of citizens have been continuously curtailed and restricted. Journalists, artists and even civil servants have been arrested on flimsy terrorism charges, and freedom of speech and expression have been restricted. This is also and particularly evident in the rights of women and other minorities. What will become of democracy, what of the population, is there a division among the people?

The obligatory Turkey skeptics in Europe, who are looking for and finding reasons to prevent Turkey's long-term EU accession due to police violence against peaceful demonstrators, have long been speaking out: "This behavior has made it clear that the Turkish government is far from understanding of democracy, human rights, religious freedom and freedom in general, as we have in Europe," said Ms. Hasselfeldt (CSU) in an interview with the German Press Agency in Berlin. She emphasized: "I am encouraged in the view that Turkey should not be represented in the EU as a full member".

However, the big question remains whether this can be of any help to the people themselves, especially in the current situation in which the Turkish ruling elite is abusing the Turkish population as terrorists, vandals, marauders, rascals, rabble and alcoholics. The political pressure on the governing party AKP and its representatives from foreign politicians would be more helpful for the people at this point.

Where are the announcements of all the existing European town twinnings with Turkish towns and communities, which we were able to experience in such an exemplary way during the German-Turkish Friendship Festival. The protest should come from these town-twinning relationships right now. Or is it still only about economic relations when the mayors meet and profess their friendship? Where are the protests from the partner city Bremen in relation to Izmir? The nature of the protests has long since been clearly documented. 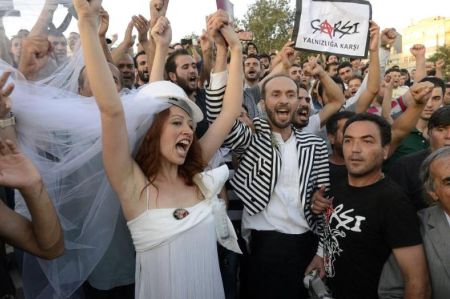 At the major rallies of the AKP on Saturday, Erdogan continues to speak of crazy idiots whose behavior the police can only react to with the most massive measures of the most brutal police violence. How such statements can basically be made by responsible people is not comprehensible. A completely different language is to be expected from politicians. There are now 6 dead and more than 7,000 injured, many are in mortal danger. Is not this enough? It is no longer enough for organizations like Reporters Without Borders to complain about 14 injured journalists.

At protests around the world, there are a few rock-throwing protesters and rioters, just as there are thugs on the police side who, protected by the police, launch massive beatings at protesters and then back into the protection of the police squads to return. Neither is to be tolerated and must be prosecuted in court. But a constitutional state would immediately stop such processes, if only to free itself from the accusation of bending the rule of law. But the opposite is the case here. In order to avoid recognizing police numbers, they are pasted over, and last night's attacks even showed that service hats were replaced by white, neutral helmets without a service number.

It's time for a liberal party linked to nature and the environment, which could be a basis for the modern and progressively thinking citizen of Turkey between the old-fashioned Kemalists and the no less one-sided interests of the AKP. Perhaps the current protests are at least leading to this result. We have often drawn parallels to developments in the Federal Republic and other countries where, in the 1970s, basic civil rights could only really be implemented by new political groups after massive police operations. In any case, the gap between the secular and religious groups in the population is deeper than ever.

"This Tayyip Erdogan will not change," Erdogan recently publicly promised. The demonstrators no longer regard it as essential if he gave in to a referendum on whether or not there should be a referendum on the preservation of Gezi Park. "We allowed ourselves to be poisoned, beaten and sprayed with water for days so that the prime minister would recognize a court decision," is one protester's comment on the issue. 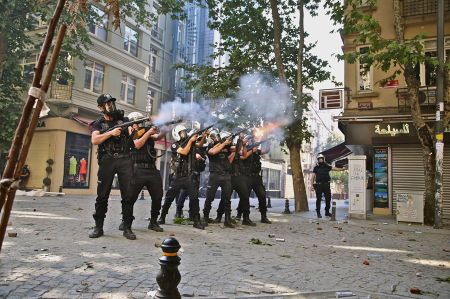 - The broadcaster Hayat TV is threatened with closure because allegedly license rights were violated.

- The Ministry of Health announces steps against doctors who helped protesters treat injuries.

- Lawyers are detained during their work with clients at court.

- Who and where are the arrested people who exercised their civil right to demonstrate?

So far, only Claudia Roth from the Greens has seriously intervened in the conflict, which could escalate to the next level with the large-scale rally planned by Erdogan in Istanbul tonight. On her flight from the police to the Divan Hotel, she herself felt the massive violence of the police operation through tear gas. The water cannons are even directed into the Divan Hotel, and the German hospital was also heavily attacked.

Can all this still be represented by the rule of law? Where is the massive appeal from German politicians for moderation? Where are the protests from German investors and business representatives, German vacationers and tour operators?

After leaving Caravan Salon hike to relax on the Rhine