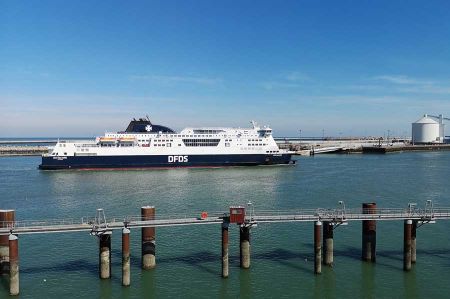 After many years of abstinence we once again decided going to England, close to the like a sword of Damocles over the island hanging exit attempt from the EU, where no one finally really knows what will happen in this long lasting episode.

However, typical of our time today, people still believe that they could turn back the wheel of time with nationalistic thoughts and actions or even stop off with the most important reason for nationalism: migration. A clear view directed forward, this probably is just explainable with eye washing and lack of perspective in the own world of thought, it is at least not to understand. Globalization is the opportunity, not the opposite.

The way inevitably led us to a ferry port and we decided for Calais for the crossing this time, a small town but important ferry port in northern France in the department of Pas-de-Calais. Calais overlooks the Dover Strait, the most narrow point in the Channel, which is only 34 km wide and the nearest French town on the way to England. The White Cliffs of Dover are clearly visible on clear days from Calais. Calais is probably the most important port for ferries between France and England. However, and as an alternative since 1994, the Channel Tunnel connects the nearby Coquelles with Folkestone by rail.

Old town and new town of Calais with striking landmarks 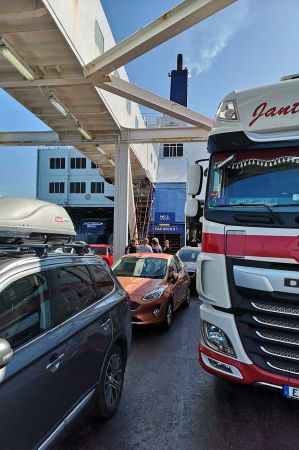 The old town, Calais-Nord, sits on an artificial island surrounded by canals and harbors. The modern district of St-Pierre is located in the south and southeast. In the center of the old town you will find the Place d'Armes, on which the Tour du Guet, a watchtower of stately size, is situated. A building from the 13th century, which once served as a lighthouse until 1848 and thus already refers to the historical meaning of the city.

Southeast of the village is the church Notre-Dame, which was built during the English occupation of Calais. It is probably the only church in the whole of France that was built in English vertical style. In this church, former French President Charles de Gaulle married his wife Yvonne Vendroux. South of the Place, opposite the Parc St Pierre, is the Hôtel de Ville (Town Hall) and the bell tower from the 16th and early 17th century. Today Calais is visited annually by more than 10 million people. Calais is not only a major transportation hub, but also a remarkable fishing port and center for fish marketing.

The Romans called it Caletum

Knowledge about the early history of settlement in the area is limited. The Romans called the settlement Caletum and Julius Caesar once gathered 800 to 1,000 sailboats, five legions and about 2,000 horses to attack Britannia. Before the 10th century, Calais was a Flemish-speaking fishing village on a pebbly and creek-lined sandy beach with a natural harbor on the western edge of the early medieval mouth of the Aa River. As the gravel and sand ridge stretched eastward from Calais, the harbor behind it developed into a moor, while the mouth filled increasingly with silt and peat.

Migrants in Calais - back to the day before yesterday? 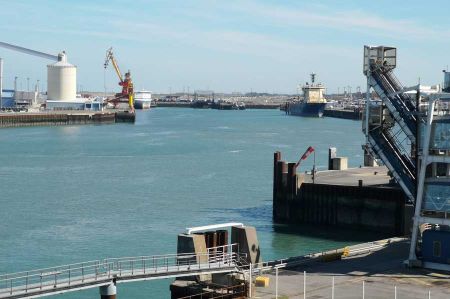 Since 1999 or even earlier, more and more illegal migrants and asylum seekers arrived in the vicinity of Calais, who then lived in the so-called jungle of Calais, as a number of the provisional camps was called. The people lived there in terrible conditions on the way to the Promised Land, which for them meant improvement of living conditions and income. They wanted to take every opportunity to enter the United Kingdom by hiding in trucks, ferries, cars or trains traveling through the port of Calais or the Eurotunnel Calais terminal to England. The people were a mix of asylum seekers and economic migrants from Darfur, Afghanistan, Syria, Iraq, Eritrea and other underdeveloped countries. Question: Who has exploited these countries in search of resources and is now surprised that people from these countries want to participate in life at us.
The Calais migrant crisis led to an escalation of tensions between Britain and France in the summer of 2015. The UK accused France of not doing enough to prevent migrants from entering the tunnel or attempting to scale fences along the border. British Prime Minister David Cameron issued a statement stating that illegal immigrants from Britain would be deported even if they reached the island. To prevent migrants and refugees from jumping on train shuttles in Calais, the British government provided fences for the Eurotunnel, where the vehicles are loaded onto train shuttles in Calais.

On 26 October 2016, French authorities announced that the camps were vacated. Whether a problem can be solved like that ?????

Think of the situation in the Mediterranean today. Does national egoism lead to solutions or are the problems getting tighter?